There seems to be some discussion and disagreement about funding strategies concerning common property reserves. From CAI we can find the definitions of funding models in the professional application.

There is also a CAI publication: 'Reserve Funds: How and Why community associations invest assets'.

From there I cannot find a reasonable explanation for choosing a funding strategy other than to say it is about risk. As we will see, the level of funding is also about value. The community members should understand the implications of choosing a model that maintains a balance of less than 100% of fully funded.

There really are only two funding methods. The Component Funding Method, also called Straight Line. And some other target of funding level most commonly called Cash Flow or Pooled. The 'other' category can be broken down into many different so called goals like baseline, threshold and statutory. But in any case, it amounts to specifying a target of ending balances through the projection, and adjusting the contributions to reserves to attain that target. When the Cash Flow method is used it is typical to maintain a level of funding of something less than the Component Method levels of funding, or, being fully funded. The Component method tends to keep the level of deposit balances well above a minimal requirement to 'just pay the bills', other methods are chosen so as to reduce the required contributions for the members of the association. But this reduced contribution is only temporary.

Under the Generally Accepted Accounting Principles(GAAP), straight line is a method of depreciated funding. The depreciation progresses at a constant rate, hence the name straight line. Common property reserves are about scheduled replacements, so there is no good reason to use any other depreciation method. The rational is that cash is accumulated from the work of an asset through its expected life so that accumulated cash can be used to replace the asset. Of course this should sound like what happens in a reserve study. The valuation of a company is the cash on hand plus the depreciated, or book, value of assets. The same applies to the common property of a home owners association. The Component Funding method maintains the full value of the property by considering the future replacement cost of each component and setting a contribution that reflects a balance against the depreciated value of each component.

For clarity, the following examples are done without inflation, interest income, or contingency. Take a $1,000 liability every ten years. In ten years we would need to have $1,000 collected for that liability, $100 per year. Using a Component, or Baseline Method, the required contribution will be identical, both models produce the same result. Here is the projection with one component. 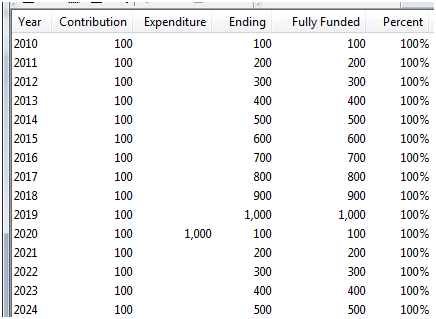 As you can see the ending of 2019 is the same amount as the expenditure in 2020. Even though we have essentially run available funds to zero, (The 2020 contribution is not considered available, it will be applied to the next liability), we are 100% of fully funded.

Now with two ten year components five years out of step. The Component model and the Baseline model come up with different results. The Component Funding Method sets the required contribution to keep the balance at 100% of fully funded. The goal of the Baseline Method is to drive the ending balance to the value of the next year's expense. The available funds are driven to zero. 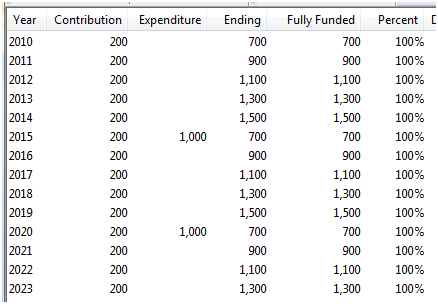 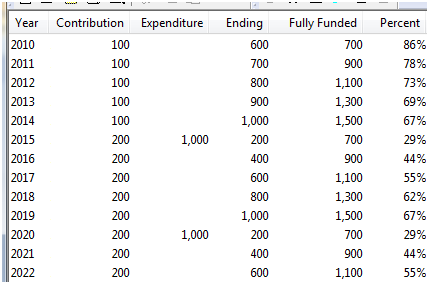 The essential feature of the Baseline Method is that funds are borrowed from future liabilities in the first five years. After that, the Baseline contributions must return to the same level as required by the Component Funding Method. This because the real future liability remains the same. The value of the common property, with reserves, has been diminished by $500. The community members have redirected funds to themselves rather than funding the depreciated value of the study components.

In an ideal world the developer would hand the property over with 100% funding and the new members would maintain that level of funding. If they decide to fund at anything less, they will only be able to do so until baseline level of the study is reached. At that point the contribution will have to return to funding levels that would have been seen as if the Component Method were used. After the point of hitting Baseline Funding, any new home owner will have missed out on the appropriation of these funds by the developer and/or the original home owners.

Risk, or contingency, is about the level of funding balances compared to liabilities. That essentially has nothing to do with 'what model'. Cash flow can be driven from Baseline to Component so there really is no difference in models other than a level of funding. Also, the level of ending balances compared to fully funded, (Percent), can be very misleading. This can be seen in the Baseline model above. From 2015 forward it is actually consistently delinquent, compared to the Component Funding Method, by $500, or 25% of the total maintained value of the common properly. The real value of a property is the depreciated value of the property plus the reserves accumulated. The Component Funding Method maintains a real value of $2000 while the Baseline Method maintains a real value of $1500.

I hope this brings new light to the question of funding strategies.